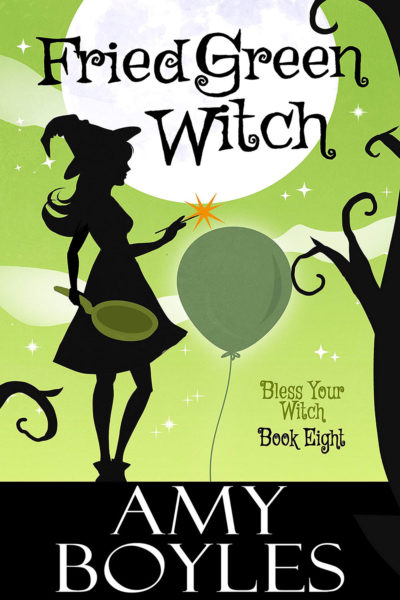 Can Dylan free her family from jail?

Southern witch Dylan Apel seems to have her life figured out. Plan wedding to her boyfriend—check. Make dresses—check. Deal with crazy pregnant ladies—not so much.

Life’s going great until Dylan and her sister Sera become entangled in a baby shower murder.

When one of the guests winds up dead and all evidence indicates that Sera poisoned the victim, it’s up to Dylan and her family to get things straightened out.

Except the rest of her family winds up in jail, too.

Now Dylan must clear her family’s name, catch a killer, and avoid becoming the next victim in a mystery that’s got more twists and turns than Dylan has dealt with before. Can she solve it? Or will she wind up dead?

“I’m growing, and not in a good way,” Reid screeched. “If I wanted something to get bigger, I’d rather it be my boobs, not my butt, and definitely not my stomach! Ah!”

I watched as my younger sister, Reid, started to expand. And it was exactly as she claimed—Reid was swelling in all the wrong places.

Panic fluttered in my chest. “Um, Sera? We might need to do something about this. Like, yesterday.”

Sera’s jaw fell. “How many pastries did you eat, Reid?”

Reid extended her hands in front of her. She wiggled fat, sausage-like fingers. I grimaced because they looked painful. I mean, skin was only supposed to get so large. “I don’t know,” she said, exasperated. “Three? It wasn’t that many.” She shot Sera a terrified look. “What’s happening?”

Sera threaded her fingers through her silky-smooth chin-length brown hair. She crossed to the plate of pastry cups that were piled high with fruit and cheeses. “I don’t know. I’m trying this new recipe, and I wished that whoever ate the food would feel lighter? Better about themselves? I wanted these morsels to make people happy.”

Reid’s feet lifted off the floor. She scrambled to grab hold of a chair. “I don’t think you have to worry about them making anyone feel lighter. You might as well have given me a shot of helium in my tush. I’m about to float away.”

Sera threw her arms into the air. “You cannot float away, Reid. The baby shower’s supposed to start any minute.”

Yeah, because the baby shower was our biggest concern at this point.

The kitchen door flew open, and there stood my maternal grandmother, Hazel Horton. Silver rings tinkled on her fingers, and her silver hair had been swept off her face and up toward the sky. It looked like she had rows of feathers on both sides of her head. “Girls, how are things going in the kitchen? The ladies are starting to arrive for the shower.”

Sera worried her hands. “It’s not going well at all. Reid is floating.”

I glanced at my sister. Her feet hovered a good foot and a half above the floor. She clutched a chair as it teetered to one side. It was only a matter of time before it lifted as well.

Grandma unwound a pumpkin-colored scarf from her neck. “What did you put in the food, Sera? Helium?”

Reid dug her nails into the chair. “That’s what I said.”

Sera shrugged. “I didn’t do anything. I made the recipe like normal, but I thought about the eater feeling lighter—you know, so they wouldn’t be all bloated after their meal.”

Sera shot me a dark look. “You know what I mean, Dylan.”

“Could y’all please stop arguing and start saving me?” Reid said. “I’m not trying to float off and away here. Last I checked, my name was not Mary Poppins.”

“You more resemble Violet in that Charlie and the Chocolate Factory movie,” I mused.

But Reid had absolutely no control over what was happening. A twinge of fear knotted my stomach. I loved my family. Really loved them. As much as I joked with them and got annoyed with their antics, I didn’t want anything to happen to them. In fact, it was kind of this weird fear of mine. I wanted all of us to stay together and be happy forever—or at least as long as we could.

That was why it had taken me so long to finally accept my boyfriend’s marriage proposal—because I didn’t want to leave my family. For some reason I equated getting married and leaving with losing my connection to them.

It was silly, I know. But I can be a silly person.

Grandma circled Reid. Then she studied the pastries. She picked one up and turned it over before placing it back on the tray. She clasped her hands in front of her and said, “Well, it looks like some magic was done on these.”

I threw up my hands. “Of course magic was performed on the food. We know that. We need to figure out how to help Reid.”

“What am I supposed to do?” Reid shrieked. “I can’t get myself down.”

I gnawed on my bottom lip for a second before spitting it out. “What if we tied weights to her ankles?”

Grandma poked the air. “Great idea, Dylan. Let’s tie her down with weights. That’s the ticket.”

Sera rubbed her palms down her face. “Why did my magic do this? All I wanted was to make some food.” She glanced at her watch. “I’ve got a baby shower right now and a sister who’s trying to drift away like a hot-air balloon.”

Grandma opened and closed her hands. “I was afraid of this,” she mumbled. “Just so afraid this would happen to one of my girls. I never thought it would, mind you. But it looks like it has.”

Sera and I exchanged a glance. I flashed a confused glance at my grandmother. “What are you talking about?”

The door to the kitchen banged open. “Why is Reid trying to fly away?”

I smirked and turned to face Roman Bane, chief detective of the Silver Springs, Alabama, police department and my fiancé.

I smiled widely as his green eyes met my gaze. His shoulder-length blond hair was pulled back, and a dusting of scruff lined his razor-sharp jaw. Roman wore a dark turtleneck sweater that hugged his biceps and chest, revealing the quarterback physique that I admired and had permission to touch.

You can all be jealous. I don’t blame you. I would be too, if that shoe was on a different pair of feet.

But anyway, a storm of locusts tornadoed inside my stomach every time I thought the word fiancé, but it fit. It was perfect. We were perfect. Life was perfect.

Except for Reid’s hot-air-balloon situation, that was.

“Would you believe that she ate some of Sera’s cooking?” I said.

Roman crossed to me. He wrapped a hand around my waist and brushed his lips across my forehead. “With all the crazy things that happen in your family, it wouldn’t surprise me one bit.”

I tried not to be insulted by that remark, but it was true. See, my family and I are witches, and that tends to get us in a whole heap of trouble. Case in point, my sister.

“Thanks for helping with the chairs, Roman,” Sera said.

Roman grabbed a stack of folding chairs and headed for the main room of the community center. “No problem.”

I turned to Grandma. “You said you hoped it wouldn’t happen to us. What’s it?”

Sera threaded a lock of hair behind her ear. “Would you please just tell us what’s going on? The suspense is killing me.”

Grandma clasped her hands together. “A one-third full moon is coming. There are many different moons in the witch calendar, but the one-third full is special. Sometimes when it lands on an odd-numbered year and that odd-numbered year also happens to have a total solar eclipse, then what happens is that certain witches—not all witches but some witches—can have problems with their powers.”

Reid’s feet were now perpendicular to the chair’s height. “All I know is that this needs to stop before I’m touching the ceiling.”

Sera worried her bottom lip. “What do you mean about the moon?”

Grandma wiggled her fingers. Her silver rings tinkled and clanked. “I mean, you got the curse, kid. Unfortunately until the moon clears, the stars realign, and Mother Nature goes back to normal, your magic is going to be wickety-wack.”

I cocked a brow. “Wickety-wack? Is that like some ancient saying that we don’t know about?”

Grandma offered a feeble smile. “Dylan, I’m just trying to keep up with you young folks and your outlandish colloquialisms.”

I patted her shoulder. “How about you not try to keep up with us?”

“Help! Somebody help me.”

I glanced over at Reid. Her feet were now pointed straight up. As much as it was amusing to see my sister in this predicament—not because I’m a sadist or anything, but only because…well, you know, practical jokes are kind of funny—it was serious.

“Grandma, can you please save her?” I said.

Grandma cracked her knuckles. “Well, Sera should technically be the person to do it, but since her magic is not so hot, I shall do the honors.”

Roman swept into the kitchen. “Probably a good thing because the ladies are walking in.”

Sera fisted her hands and cringed. “Please, Grandma. We have to hurry. They can’t see her like this. I can’t get blamed for it. I don’t want anyone to know what happened. You’ve got to help me.”

“Can you please breathe?” I said, rubbing her shoulders. “Just breathe. Everything will be fine.”

Grandma wiggled her fingers and closed her eyes. A second later Reid started drifting back to the floor.

“Whew,” she said, obviously relieved. “Thank goodness. I was afraid you were going to let me fly right out the window.”

Reid’s feet clicked onto the linoleum. She flashed me a wicked smile. “I know, but I can never be too careful around y’all. It would just be my luck that a window would appear and I’d fly right out of it.”

“Thankfully that didn’t happen,” I said. I clapped my hands together. “Great. Since that crisis was averted, I guess we gotta figure out the next one.”

Sera twisted her hair around her finger. “What do you mean?”

“Well, clearly we can’t serve this food. It’s liable to make someone explode,” I said, joking.

Roman traced a thumb over his straight jaw. “She’s right. What happened to Reid will happen to someone else.”

Sera’s face crumpled. “Grandma, what am I gonna do?”

Grandma peeked out the door. “I don’t know, but we may want to go out there and stop them.”

Sera’s eyes widened. “What you mean?”