The monster hunter from WITCH'S BLOCK gets his own limited series! 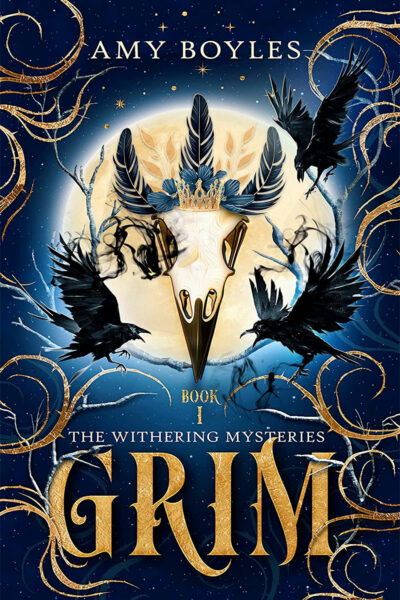 The monster section of Aaron’s library put my own library at home to shame. There were dozens of studies on different creatures from every corner of the world. I poured over them, partly hoping to discover a cure for myself and partly to understand what haunted Aaron.

After three hours I hadn’t come to much of a conclusion about either. My shoulders were tight from hunching over a table and my eyes were tired.

I rose and stretched as Lily’s voice drifted in through the door.

Clouds had covered the sun. Though the morning had been filled with golden light, brightening the gloom that shrouded the castle, as the day moved to afternoon, the darkness was already creeping in, casting long shadows in the hallways.

Lily giggled and I stepped from the warmth of the library with its cheery fire (not that it cheered me) into the gray cold hallway.

“No, they don’t know,” she whispered.

I thought that I heard another voice, one whispering in a low tone.

“What’s that? Don’t do that,” Lily said, sounding like she was begging.

The hackles on my back rose. I sensed a second presence. Probably just Miss Gabor. But still, unease pressed against my chest and I strode down the hall to find Lily.

“Someone’s coming,” I heard Lily say in a hushed voice.

I rounded a corner and there sat Lily with a doll. “Oh, Mr. Grim. It’s only you.”

My gaze roved up and down the hallway. We were in an alcove. A red oriental rug draped the floor and a window seat was pressed into the stone wall. Peering out, the labrynth came into view.

A chill swept down my spine, but I ignored it.

I knelt down and Lily beamed at me. “Lily, who were you talking to just now?”

She lifted the figure. Its face and hands were made of delicate ivory porcelain. Hand-painted cobalt blue eyes stared blankly at me. Lily pinched one hand between her fingers and raised it to shoulder height. Then she released her grip and the arm fell limply to the doll’s side.

My gaze raked over the space. There was nowhere for someone to have hidden. The hallway was wide open and I hadn’t heard footsteps as I approached.

I smiled. “Just your dolly? That was the only person here?”

Lily beamed back. “Just her.” She made the doll dance across the floor and picked up a second doll that had been cast aside. Lily held it up for me. “Want to play?”

She pushed out her bottom lip. “Please? Won’t you please play dollies? I don’t have anyone to play with.”

This was above my paygrade. Playing with a child? Dolls, no less. I wasn’t about to do it.

But as Lily peered up at me with weepy eyes, I sighed and glanced around.

The coast was clear.

“Five minutes,” I told her sternly. “That’s as much time as I’ve got.”

She patted the floor beside her. “Sit down and let’s play. You can be Mrs. Pimplebottom.”