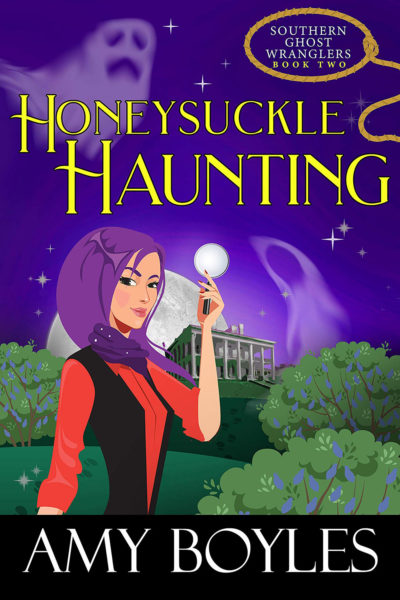 Just when Blissful Breneaux is getting used to her new life in ghost-filled Haunted, Alabama, a stranger enters town with the promise of solving a thirty-year old murder. When that stranger winds up dead, Blissful is thrust in a murder mystery that threatens to destroy the happiness she’s created.

Her friend Alice becomes suspect number one. As if that’s not bad enough, an old ghostly nemesis promises to help…but at a price. All the while Blissful is trying to figure out her relationship with the difficult but mesmerizing Roan Storm.

Can Blissful solve the murder and help her friend? Or will she become the next cold case in Haunted Hollow’s history?

I waved as if it was no big deal, but I could barely hear over the music. “It’s fine.”

I sat across the table from Roan Storm, Haunted Hollow’s most eligible bachelor. At least he was if you asked Susan Whitby, my friendly ghost companion.

Roan opened his mouth as if to say something. A trumpet blared. The jazz band was in full jazzy swing. “Seriously, though. Sorry about the music,” he shouted. “I was hoping to talk to you since you’ve been so busy these past few weeks.”

I snatched a breadstick from the basket and snapped it in two. “Moving has been hectic,” I yelled.

All eyes swiveled to me. I nearly raised my hand and said, Yes, that’s me, ghost wrangler extraordinaire. Take a picture. It’ll last longer.

As quickly as I became the room’s focal point, their gazes flickered away. Roan smiled. “Sorry. Didn’t mean to out you.”

I bit into the breadstick and chewed, trying to come up with something to say. Truth was, I hadn’t been on a date in…months? Years? Millenia?

I hadn’t expected to ever be on a date with Roan. Not for any real reason, just because I wasn’t supposed to stay in Haunted Hollow longer than a few days.

But now that I was living here, at least for a little while, I actually couldn’t wait to get to know him.

I know. It was so unlike me. When we first met, I did everything to stay away from him. His very presence sent alarm bells blaring in my head to the likes of, Danger, Will Robinson!

“But seriously,” he said since apparently I’d forgotten how to speak, “how is the ghost hunting going? You’re practically famous in town. I’m pretty sure I saw someone waving a sign with your face on it. They were going to get it autographed.”

The twinkle in his eyes almost made the note of sarcasm in his voice undetectable. Almost. I wasn’t going to let Roan get off that easily.

“Jealous, aren’t you? Sad that you don’t have your own groupies? Little old ladies who bake cinnamon bread?” I said drily.

He threw back his head and laughed. This was why I liked Roan Storm. He could dish it out as good as he took it. For weeks I’d been dying to get him alone, talk to him, crack his head open and see what made him tick. But we’d both been crazy busy and hadn’t found time to chat until now.

“I thought you were waving the peace flag,” I said.

“Oh, you thought I was going to be nice to you even if we’re on a date?” The twinkle in his brown eyes proved he was kidding.

I glanced over my shoulder at the upscale restaurant. “Is this a date? I was under the impression you were buying my dinner because you realized you live in the most boring city on earth and since I’m the most interesting person around, you wanted to find out my secret for staying so intriguing.”

He chuckled. It was a thing of beauty that made my heart tighten.

Not that I would ever tell Roan that.

He grabbed a breadstick. “You got me there, Ghost Wrangler.”

Okay, so in case you didn’t know, my name’s Blissful Breneaux and I see dead people. Not all the time, but if one’s hanging around and decides to talk to me, then I’ll see them.

It’s actually really annoying. Like when a ghost decides they just want to hang around and chat, that can be weird.

I mean, what do I actually have in common with a dead person?

Of course if you asked them, they’d say something like painting toenails, gossiping about boys, doing hair—and I’d want to slap them in the face.

I’m not the sort of girl who spends my free time doing stuff like that.

What I actually do, however, is help a couple of grannies search for ghosts in their thriving ghost-hunting business called Southern Ghost Wranglers. I’m also trying to figure out my life, which was turned topsy-turvy a few weeks ago when I was fired from my job as a covert government ghost hunter and thrown into Haunted Hollow, Alabama.

I had one task—find the biggest bad ghost of them all, named Lucky Strike, and haul him into the agency.

First off, it’s not easy catching ghosts. Secondly, I couldn’t find him. But when Lucky did show up, he told me things about my father and the agency that made my heart pound, sweat pour from my skin, and basically forced me to rethink my entire life.

So I had no idea what I was doing anymore. I didn’t even know if I wanted to catch Lucky. What I did know was that I’d made two new friends in a pair of grandmothers and Roan Storm was taking me out to dinner.

Don’t even get me started on Roan. This guy had more secrets than a Polly Pocket doll had accessories.

Not that I liked dolls. But what I mean is that Roan kept stuff close. Stuff he probably should keep close.

Okay, okay. Apparently there’s a ghost locked in his basement. Listen, I don’t know if it’s true. I’ve never been down there, and I have no intention of visiting.

“Do you eat it raw?” he said with a lilt to his voice.

Okay, so before we go any farther, let me explain what Roan looks like. Chocolate-colored hair swept back in an almost yuppie sort of way, dark sparkling eyes, a smile that would make even the most evil of trolls light up, and a muscled body that made Roan look like he chopped wood for a living.

And he was also the most sarcastic person I’d ever met besides myself.

So yeah, it was probably love, but I wasn’t going to get too excited about it. Actually, it was either love or really deep hatred. If love was puppy dogs and kittens, we were two chained dragons shooting fire at each other.

Personally I liked the fire.

Roan slid his menu to the side. Oh, and did I mention he had the most beautiful fingers? He played guitar. Of course. Seriously, was there anything wrong with this guy? Anything at all?

If there was, I would find it.

“How are you going to have your steak cooked?” he said.

“Medium.” I placed my menu atop his.

My lips quirked. “What makes you think I like rare steak?”

“It’s your razor-sharp wit.” Eyes sparked. “I thought since you enjoyed eviscerating me every chance you got, that you enjoyed your meat bloody.”

I laughed so hard I snorted.

He rubbed his hands. “See? I knew you enjoyed giving me a good tongue-lashing.”

My gaze shot left. My spirit friend Susan Whitby sat in an empty chair at our table. She stared at Roan. “I mean, look at those muscles. He could do things like I totally don’t know what, but I’m sure they’d be super sexy and awesome and I would totally die.”

I coughed into my hand. “Already dead.”

I swatted the air. “Oh nothing. Just a gnat.”

Susan smacked her gums. “I totally know I’m dead. It’s just so rad to think I’m not. Especially when it comes to your boyfriend.”

I shot her a look that said, He’s not my boyfriend.

Unfortunately Roan caught it. “Everything okay?”

I leaned back. “Yep. Everything’s great.”

See, this was the problem with being able to see spirits. Susan pretty much considered me her friend. If she spied me out in public, she had no problem tagging along.

Which was a problem when I wanted to get rid of her. But it was cool; I could turn her off. Sort of. I could at least ignore her, even though it wasn’t the nicest thing to do.

“But seriously.” Roan leaned forward. “Thank you for coming out with me. I’ve been wanting to talk to you, get to know you better.”

My heart pounded. What was it about opening myself that scared the living crapola out of me?

I sipped my water. “Yep. Me too. Thanks for inviting me.”

He leaned forward. “So listen—”

“Is this thing on?” A man about midforties tapped the microphone. The jazz band had disappeared into jazz land or wherever, and now it looked like we were about to suffer through Improv at the Steakhouse.

Roan flashed me an embarrassed smile. “Sorry, usually there isn’t entertainment until later.”

“Like ten. And usually,” he said, studying me in a way that made my heart spear to my spine, “it’s acoustic guitar, not trumpets and announcements.”

I wiggled my brows. “Think this guy will give us the weather?”

Roan chuckled behind his hand. “I bet it’s the play-by-play of our dinner. ‘See the woman with the violet hair? She likes her steak with a beating heart.’”

I stopped myself from throwing my napkin at him. “And see the really tall man who bakes bread? He eats tiny hors d’oeuvres that are people-sized.”

He wiped his eye. “That makes no sense.”

“I was only trying to sound better than you.”

He tapped a fist to his knee. “I think you won.”

The man at the microphone cleared his throat. All I really wanted was steak, not an announcement, but hey, when you’re living in Haunted Hollow, Alabama, the most haunted city in the state, you roll with it.

Neal looked like a hip college professor. He wore a red T-shirt underneath his tweed jacket. The crimson shirt matched the Converse on his feet.

Neal cleared his throat awkwardly. “I’m here in Haunted Hollow because tomorrow night I’m going to lead anyone who wants on a path that will weave through town. We will retrace the steps of one of Haunted Hollow’s more famous residents—Susan Whitby.”

“You’re kidding.” The ghostly bread roll Susan had to her mouth plopped onto the table. How did she get ghost food? I had no idea how that worked.

Neal cleared his throat again. “Some of you may know Susan Whitby as The Teenybopper. She has haunted this town for over thirty years. On the night of November 30, 1984, Susan was murdered. Well tomorrow, on the anniversary of her death, we will retrace Susan’s final steps.”

“I retrace them all the time,” Susan mumbled.

“I know what you’re thinking,” Neal explained. “You’re thinking, what does this have to do with anything? What will hiking through town possibly do?”

Roan shot me a look that said, Yes, that’s exactly what I was thinking. I had to hide a laugh behind my hand.

“What will it do?” Susan whispered.

Neal raised his finger dramatically. “At the end of our little journey tomorrow night, I will announce in front of those of you in attendance, who murdered Susan Whitby all those years ago.”

My jaw dropped. I glanced at Susan. Her eyes were big as plates.

Roan raked his fingers through his hair. “That should be interesting.”

I glanced back at Susan. She rose, her ghostly figure trembling. She took a wobbly step forward and then fainted to the floor.

Right on cue, the jazz band started back up, drowning out any potential for conversation.