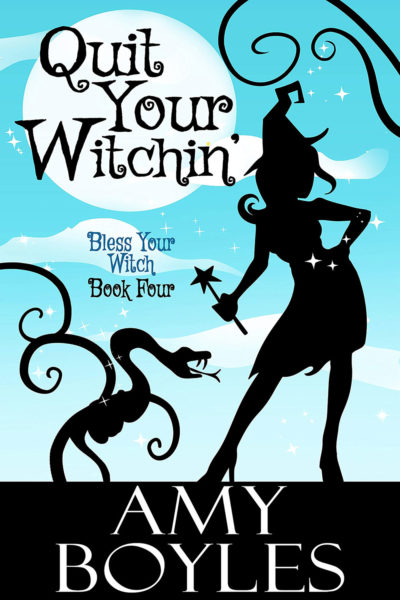 There’s a murderer on the loose again… but is witchcraft involved?

Southern witch Dylan Apel just can’t stay away from murder. When a stranger’s body turns up in the school gymnasium, everyone’s on high alert. The search is on to discover the person’s identity—is it a random hobo or someone connected to the witching world?

With Dylan’s super-hot boyfriend Roman Bane on the case, this should be an easy one to solve, right? But when a new witch arrives with the intention of stealing Roman right out from under Dylan’s nose, her world is sent topsy-turvy. Things only get worse when Dylan’s family is attacked—whoever is committing murder intends Dylan to be next!

Dylan must solve a murder, protect her family and keep the new witch’s claws from sinking into Roman—all while running a successful dress shop and staying sane. Will Dylan figure out the killer before she becomes the next victim?

Reid streaked toward me. “Ahh! It’s going to hurt me!”

A crimson paper heart, cut from the best construction paper I could buy at Dollar General, soared toward my baby sister.

She shielded her face. “Stop it!”

Reid clutched the burgundy curls that cascaded over her shoulders. “Then why is it chasing me?”

The heart flapped its body like wings, wobbling through the air. The thing wasn’t exactly aerodynamic, though it was, in fact, aiming right toward Reid.

I cocked my head. She had a point. It might want to cut her.

My name is Dylan Apel and I’m a witch. My whole family is. Well, all of them except Reid, who was currently under attack from a decoration for the annual Silver Springs Valentine’s Day dance. Yep, it was a community affair—come one, come all—from the geriatrics to the littlest ones. But this particular paper heart, limply beating its body around the room, was supposed to be hanging from the ceiling of the high school gymnasium, not magically bobbing around it.

My maternal grandmother, Hazel Horton, pushed up the sleeves of her sequined Valentine’s sweater. The front had a naked cupid shooting an arrow. The back had the phrase, Will you be mine? She hadn’t gotten a lot of offers on the latter yet.

Grandma grabbed me by the shoulders. “Dylan, you must wrangle them. Get control of the hearts before they shred our skin.”

My other sister, Seraphina—Sera for short—punched a heart to the floor and smashed it with her boot. “Because you’re the one who caused this. They’re supposed to be on the ceiling. Not attacking us.”

That was indeed true. I might be a witch, but I’m not always great at magic. I’m getting better, but it takes a while to learn all the ins and outs of witchcraft. Apparently, right now was one of those out times.

She thrust a ball of twine in my hands. “Make a lasso. Corral them.”

I stared from the twine to the flock of hearts flapping around the room. “Are you kidding?”

She clapped my shoulder. “Of course not. This is a battle. You must be in control. Take a stand. Here.” She yanked the twine off the roll and secured it into a lasso. She snipped the end with a pair of scissors and shoved the string in my hands.

“Be one with the lasso, Dylan. Wrangle the hearts.”

Reid caught the homicidal heart that had been chasing her. She ripped it in half. “Yeah, Dylan. Wrangle those hearts just like you did Roman’s.”

My little sister was talking about my boyfriend, Roman Bane, chief detective of Silver Springs, Alabama. “Yeah. Good thing he isn’t here. He’d have a fit.”

A side door swung open. “I’ve got the chairs.”

I gnawed my lower lip. Speak of the devil.

Roman dropped the chairs and whipped off his black sunglasses. He stared at the mess of paper hearts flying about the room. Then Roman shot me a dark, scathing look.

“It was an accident?” I squeaked.

“Then why are you saying it like it’s a question?”

“Because I don’t know why?”

He sighed. Locked the door behind him and strode over. Roman was six foot two inches of chiseled muscle that made my knees jellify every time I plastered my gaze on him. He threaded his fingers through shoulder-length blond hair streaked white by the sun. His green eyes blazed as they searched the room. After several long moments his gaze settled on my family and me.

He nodded toward the string in my hand. “What’s that?”

He tapped his fingers against slim hips. “You going to play cowboy?”

“I was thinking more along the lines of Wonder Woman.”

He sidled over and smiled. The corners of his eyes crinkled, and his gaze filled with a goopy look that some might call love.

“Because you can’t stay that way,” I said hopefully.

“Right.” He exhaled. Planted a kiss on my forehead. “I brought you something.”

A giggle of excitement bubbled in my throat. “What’s that?”

He handed me a to-go cup of specialty coffee. “A mocha.”

I took a quick sip. Warm java and chocolate mingled together over my tongue before sliding down my throat. “Oh, that’s heaven.” I glanced up at him and grinned. “You’re the best.”

His soft gaze settled on me. He thumbed my cheek and smiled.

Roman coughed into his hand and straightened. He glanced around. “No one’s seen this, have they?”

I placed the cup on a table and licked foam from my lip. “Nope.”

“Let’s keep it that way. I don’t want the witch council crawling around this place.”

But luckily my family—well, me and Sera—were exempt from that punishment. We’d helped the community out by catching a killer a few months back, so now we were golden.

Sera pointed to the ceiling. “One of them’s heading toward that open window. Dylan, Councilwoman Gladiolas will have a fit if she has to come down here and wipe a whole bunch of people’s memories.”

Okay, so I didn’t want to push my luck on being golden.

Grandma threw her hands in the air. “If you two would just learn how to erase memories, then you wouldn’t have to rely on someone else. You could do it yourselves.”

I frowned. “Yeah, yeah. I’ve been busy. I’ll learn it soon.” That was true. I had been busy. I had a dress shop to run, magic to learn and be terrible at—you know all the hectic things that were part of life.

Roman grimaced. “I’m going to pretend like I’m not hearing any of this. Please don’t tell me if you start wiping regular people’s memories.”

“The erasing isn’t, but the part about working magic in front of them is.”

I smiled. “Oh, well. I don’t plan on that. Besides, I’m exempt from any punishment.”

“I wouldn’t push your privileges.” Roman brushed his mouth over my ear. “Good luck. You know I love you.”

I gulped down the egg in the back of my throat. Yes, I knew he loved me. He’d been telling me for a while now. Problem was, I couldn’t quite tell him back. Don’t shoot me, okay. Roman was hot. Roman was awesome. I know. I know. I’m a total loser for not being able to tell him.

It’s just…love was heavy and stuff. I wasn’t sure I was ready.

Roman’s jaw clenched as he smiled.

A zinger of pain shot into my heart. I felt like it crushed him a little every time I didn’t say “I love you.” As bad as it made me feel to witness his hurt, I wasn’t going to voice something I wasn’t ready to embrace.

She gave me the quick and dirty, which I can sum up as, and I quote, “Be one with the lasso. Aim it at your target and throw.”

Seriously. That’s all the instruction I got.

So I aimed and threw. At every single heart. And there were like, one hundred of them. But I managed to get them all, including the one threatening to flap right out the window.

“Whew.” I smeared a line of sweat off my forehead. “Glad that’s over. Someone remind me never to try getting decorations to hang themselves again.”

Sera smoothed down her glossy chocolate-colored locks. “Don’t worry. After fighting paper hearts, I’m pretty sure we’re all in agreement on that.”

“Yeah,” Reid whined. “You almost got me all wounded and stuff.”

I rolled my eyes. “Did you get even one paper cut?”

Reid inspected her arm. “I thought I had one.”

“Well until you find that one, I’m going with no.”

She stuck her tongue out at me.

“I’d hate for your tongue to freeze that way. What would Rick think?”

Rick Beck was Reid’s boyfriend and our next-door neighbor. Reid had drooled over him for a good year or so before they finally started dating.

Roman tapped his foot. “All this teenage arguing is hard to rip away from, but I’m going to grab the chairs.”

I squeezed his marble-hard bicep. “Thanks.”

I followed her finger until I saw it. One lone heart flapped desperately against the bleachers.

My family stared at it. No one moved to grab it.

I grumbled something not appropriate under my breath and made my way to the heart. It beat sadly against the aluminum seating. I figured I could catch it with my hands. There was no need for my magic lasso, though I might keep that thing nearby. See if I could spell it to make people tell the truth.

You know, pretend I really was Wonder Woman. Because that’s what all sane twenty-eight-year-old women with their own dressmaking businesses did. They dressed up and pretended they were comic book characters.

I snatched the paper heart and folded it in half. It fought but settled down once I had it secured.

As I turned back toward my family, I noticed something glinting in the bleachers. I peered through the slats and saw a watch. As I looked closer, I noticed the watch was attached to a hand, and the hand, an arm. My gaze slid on up. A man was stuffed between the slats. His head lopped over at a sick angle. You didn’t have to be a coroner to know there wasn’t any breath left in those lungs.

I stumbled backward. “Roman, I think you need to get over here.”

He chuckled. “The heart giving you a hard time?”

He crossed over. “What is it?”

I glanced back at him. “A dead body.”