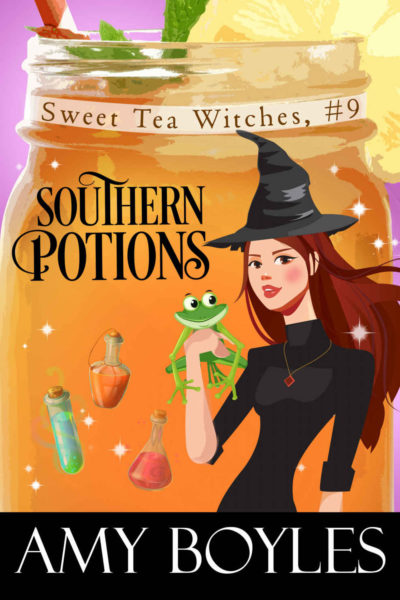 One member of Pepper’s family has been turned into a toad. Can she save them?

It’s New Year’s and Pepper Dunn is ready to celebrate. She’s been hard at work creating a potion for the annual Potion-Making Contest. All she must do is present her creation.

Pepper’s plans go awry when a sorceress claims she can turn a witch into a toad—all she needs is a volunteer.

But when the sorceress is murdered and the potion stolen, all Pepper wants is to stay out of it. She’s had enough of murders.

Problem is, one of her relatives was transformed into a toad. With the potion missing, Pepper must act fast to find it before her family member is stuck living as a toad—forever.

Y’all, it had not been a good night.

Mainly because Amelia and Cordelia did not agree on whether their fathers’ arrival into town had been a good idea or a bad one.

I was pretty much in there with them.

The four of us—me, Amelia, Cordelia and my grandmother, Betty—sat at breakfast. A bowl heaping with pineapples, grapes and apples squatted in front of me, but I stared longingly at Betty’s biscuits and gravy. All the eating I’d done over the holidays presented in my body as a bloated stomach, bloated face and tightened zipper flies. Those sneaky pounds had apparently attached themselves to me, hence the fruit salad breakfast.

I stabbed a pineapple. “The potion kit is going okay. I only just opened it yesterday. Not sure if I’m going to be ready to enter this contest y’all have in Magnolia Cove.”

Amelia’s eyes flared. “Of course you’ll join. Everyone does. Well, everyone who can make a decent potion. That’s all of us, of course. Plus the whole town attends the finals.” Her gaze drifted to Cordelia. “I’m sure our dads will be there.”

Cordelia’s hands fisted. Her voice tightened like a guitar string ready to snap. “I don’t care if our dads will be there.”

“You should,” Amelia said smartly. “They’re our dads.”

Fumes nearly plumed from Cordelia’s ears. “Amelia, when are you going to get it in your head that they didn’t want anything to do with us? Not one thing. If they’d wanted to be with us, they would’ve stuck around. They would’ve stayed. But they didn’t. They left.”

“They wanted to be here,” Amelia argued, “but our moms wouldn’t let them.”

Cordelia looked like she wanted to launch herself across the table. “Why are you listening to our moms? They’re chaos witches. They’re barely responsible human beings.”

Cordelia stabbed her fork into the table. “I’m not going to argue this with you. You can have all the contact you want with your dad and uncle, but I’m not interested. They’ve had over twenty years to be a part of our lives. Why wait until now?”

I added that because here’s the deal—my cousins’ fathers are half genie, as in grant-your-wishes genies. Isn’t that cool? I thought it was, but the reason why Mint and Licky, my witch aunts, were no longer with the men was because the wishing abilities had gone haywire when Amelia and Cordelia were little.

Things had gotten so bad that Mint and Licky had left their husbands and wouldn’t let the men near their daughters in case more bad wishing stuff happened.

As it was, so far Amelia and Cordelia couldn’t grant wishes. At least not yet. That was probably for the best.

Amelia twirled her fingers, and food shuffled around her plate. “At some point, Cord, you’re going to want to know your dad.”

Cordelia shrugged. “Maybe. Maybe not. Either way I’ll survive, Am.” Cordelia imitated the way Amelia had shortened her name. Amelia glared at her, and Cordelia smiled. “After all, I’ve lived this long without knowing them.”

“Well it doesn’t matter to me,” Amelia said. “I’m still going to know my dad.”

All gazes flicked to my grandmother, who sat quietly eating biscuits and gravy. There must be an age where you no longer care about what you eat. When one square of chocolate doesn’t make you worry that your hips will explode, like it does to me now.

Boy, would I really like to hit that age. Okay, maybe not that age but that attitude.

Yes, I will take the attitude.

Amelia’s voice rose in angst. “Why would you say that? Tell me to be careful around my father? It’s not like he’s an ax murderer.”

Betty’s mouth twisted into a frown. “I’m only telling you to be careful. Just be careful. Don’t think about it too much. Just do it.”

Amelia glared at Betty. “You mean something by that.”

“I don’t mean anything.”

“I refuse to believe that.” Quiet settled over the room. Amelia didn’t let it permeate too long. “Anyway, have y’all heard? It looks like the great potion master Saltz Swift is coming to judge the contest.”

“Let me roll out the red carpet,” Betty added.

Did I sense a tinge of dislike? “What is it? What’s wrong with Saltz Swift?”

“Only that he thinks he’s God’s gift to potion making,” Cordelia said.

“He is a potion master,” Amelia argued.

“Which would be fine except he walks around wearing flowing white shirts and black leather pants.” Cordelia dropped her fork and swiped a napkin across her lips. “If his hair wasn’t short and slicked back, I’d swear he was the lead singer in an eighties hair band.”

“Well anyway, Saltz is coming. And you know who else is?” Amelia said.

Betty’s knife clattered to her plate. “Shelly Seay is coming here? To town? I haven’t seen her since she lost her job at the school.”

I frowned. “What school?”

Amelia smiled, obviously proud that she had one-upped Betty on her knowledge. “I heard it from the post office. She sent all her belongings ahead by witch mail. Didn’t even bother to bring them with her.”

Betty jumped from the table and ran to the door. She shut the blinds and locked all the doors.

I bolted from my chair. Why were we were suddenly in a state of panic? “What’s wrong with Shelly Seay? Is she going to destroy the town? Spell us all? What is it?”

Cordelia rushed to the kitchen. She returned and started clearing plates. “Shelly Seay is a sorceress.”

Cordelia rolled her eyes. Clearly this was more than rumor. “Right. Okay. Well, it’s rumored that Shelly is a sorceress. She doesn’t always attend the potion-making contest, but when she does, it’s believed she pokes around town, asking folks what they’re doing. Then she steals the best potion from its maker, tweaks it and wins the contest for herself. If you want to have a fighting chance, the best thing to do is avoid her. At all costs.”

I watched as Betty lifted her shotgun, placed her back against the wall and peeked out the blinds.

I shook my head. “I take it that’s why we’re acting like we’re not here. So that Shelly the Sorceress doesn’t appear out of nowhere and steal whatever ideas we’re working on. By the way, y’all, I have no idea what I’m doing for a potion.”

Amelia’s face split into a wide smile. “Last year Cordelia made one that bestowed a person with the ability to make smart, sarcastic remarks for exactly thirty minutes.”

Amelia clapped with glee. “And I made one that allowed the user to be able to talk to the most boring person ever. I mean, if you were at a New Year’s Eve party and got stuck with a dud, this was the potion for you.”

I laughed. “Those are hilarious.”

“That’s the point,” Betty said. “It’s complete nonsense fun to start the year off with a bang. Most folks in the regular world take this day so seriously—go to the gym, lose fifty pounds. Not us. We have fun.”

“But not Shelly,” Cordelia said. “She takes it seriously. It’s best not to run any risks when it comes to her. Make silly potions—nothing she’s going to steal.”

“But I don’t understand. If she steals the potion, why doesn’t the person it was taken from say anything? Accuse her.”

Cordelia hitched her brows. “Because they forget.”

I rolled my eyes. “Okay. Whatever. I don’t even know what potion I’m making, so I doubt she’d be interested in me.”

But that was a lie. I totally had an idea for a potion; it’s just, until I knew how to make it, I wasn’t going to be spouting off about it. You know, there was no reason for people to get excited, especially if I failed miserably.

But maybe the grand potion maker, this Saltz guy, could help me. Since he was a grand potion guy, he had to know something about potions.

“Anyway, the best thing to do is avoid the sorceress.” Betty took her place in the rocker, shotgun strapped across her knees. “There’s no reason to keep her out of town, but she’s no good. There’s no doubt about that.”

“Who is it?” Betty shouted.

My cousins gasped. Now Amelia, I can totally see her freaking out, but to watch Cordelia have that scared response made me nervous. She never overreacted. Which meant Shelly Seay must be pretty freaking awful.

“I know you’re in there,” Shelly said from the other side of the door. “I need to speak to the Craple women.”

“I insist,” Shelly said. “As a witch I insist you open the door and speak with me.”

Betty nodded curtly. “She can. Shelly can invoke witch courtesy and demand we speak to her.” She lowered her voice. “But only if she invokes it.”

Shelly pounded. “I invoke witch courtesy that you open this door right now.”

The three of us exchanged a frightened look. “Well,” I said, “seems there’s no other choice.”