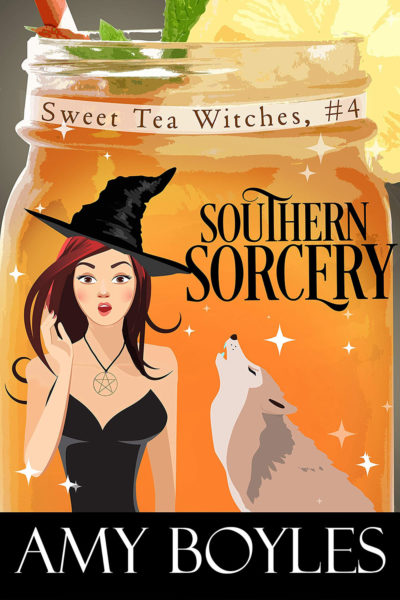 Pepper Dunn can’t catch a break. As soon as life settles down in the magical town of Magnolia Cove, Alabama, the sorcerer Rufus Mayes appears, hell-bent on stealing Pepper’s powers for himself.

When Rufus casts a spell that links his magic to hers, Pepper is determined to break the connection at all costs. Luckily, she doesn’t have to look too far for help. When an aging wizard agrees to assist her, victory is at hand.

But when the wizard winds up dead, all hope is lost. Will Pepper find a way to break the spell cast against her, or will she stay linked to Rufus forever?

I happened to be standing in the middle of my little old Southern shop, Familiar Place, when all heck broke loose.

Well, it wasn’t really all heck, but that’s what it appeared to be at first.

The door shot open as if a great wind had pushed it. I jerked, stumbling as a swell of magic pushed me back.

The birds squawked. The kittens meowed. The puppies barked.

Hugo the Dragon fluttered up. His neck stretched forward, and his mouth opened as if ready to shoot an arrow of flame.

Oh yeah, in case you didn’t know, the shop is actually a magical pet store that I own. Name’s Pepper Dunn. I’m a witch who matches pet familiars with their owners.

I’ll admit, I haven’t been doing this witch thing for very long. I’m fairly new at it and still have tons to learn.

But it doesn’t take a genius to figure out that when your front door blows open like a tornado shoved it in, you’d better pay attention.

Standing in the doorway was Rufus Mayes. In case the explosion of air didn’t give it away, Rufus is a bad guy with a capital B. Like, really bad. From what I understand, he likes to play Dr. Frankenstein on folks. Once he tried to turn someone into a vampire. Or he was playing vampire on someone. Yeah, that’s it.

He’s a witch with serious issues. Four times he’s attacked me—trying to take my powers or kill me or whatever. Each time I’ve been saved.

Anyway, Rufus wore his usual black leather from head to foot. Ebony eyeliner rimmed his eyes, and the smirk on his face told me he saw victory at hand.

“What are you doing here?” I said, pushing to my feet. “You’re not supposed to enter Magnolia Cove.”

“Well, here I am,” he said, sauntering in. “And I don’t see anyone stopping me.”

My heart thundered against my chest. This was bad. This was very bad.

Rufus smiled. “Why, you, of course. This time nothing’s going to interfere.”

His gaze landed on the animals. He shot out his hand, and the creatures fell into a slumber. Even Hugo. The dragon drifted down to the floor, falling asleep.

Last time Rufus showed up at Familiar Place, the birds attacked, sending him reeling from the store. Clearly that wasn’t going to happen this time.

He looked at me and smiled. “I’m not taking any chances.”

I fisted my hands. “And what makes you think nothing’s going to stop you?”

Rufus raised a hand. “Because you and I are leaving.”

I lunged. Rufus snapped his fingers.

Familiar Place melted away, and I was plunged into darkness.

The inky dark only lasted for a few brief seconds. An orb of light flared in the corner of my eye.

I felt a hand on my arm. I slapped it away and jerked back.

Everything righted and I found myself back in the store. Rufus stood about a foot from me. I stepped back.

“What happened?” I said.

He looked at his gloved hands. “I don’t know. We were supposed to leave, but something didn’t work. Drat. This always happens when I enter this cursed place. Something always goes wrong. Why? Why me? All I ever ask is to be able to work one feeble spell correctly, and I’m foiled.”

He glanced at the ceiling as if speaking to whatever deity he deemed his patron saint or whatever. “Every single time. Is it too much to ask for a little magic to go my way?”

I fisted my hands. “Get out of here before I call the cops. I happen to live with the sheriff’s sweetheart, so if you don’t get the heck out of town, I’m pretty sure you’ll be bucked out by the next ornery mule you see.”

Rufus’s lips spread wide as he laughed. “Do you really think I’m going to let a little hiccup interrupt my plan?”

His dark eyes brightened as he stared at me. “I might not be able to whisk you away from Magnolia Cove, but that doesn’t mean I’m done with you.”

I grabbed the first thing I could find. A telephone book. Great. I could swat him to death. This was like that horrible Facebook question where you’re suddenly thrown into the zombie apocalypse and whatever item is to your left is now your only weapon.

And mine was a telephone book.

Wow. I wouldn’t last five minutes against an army of zombies.

But I might be able to last a bit longer against Rufus.

I threw the phone book at him. Rufus pointed a finger at the cover, and the book shredded into confetti.

He sauntered forward in his tight leather pants. “Since I obviously can’t take you with me, at least not now, there is still another way I can get to your power.”

Rufus lifted his index finger and circled it. My body froze. I felt like I had been lowered into a vat of concrete.

“This is not the way to get a lady’s attention,” I said. “You must be a horrible person to date.”

“Well not the way you act, you don’t. You should be ashamed of yourself. Didn’t your mama teach you any better?”

“My mother taught me the ways of dark magic.”

That thin, amused smile was still sewn on his face when he stepped within a few inches of me.

In the past my magic has worked based on fear. It usually bolts from me, uncontrolled. All I have to do is focus on a subject and throw it out.

The problem was, I didn’t feel afraid of Rufus. Maybe it was his candid smile. Maybe it was the sparkle in his eyes. Don’t ask me. All I knew was the creeping fear that should have been residing in the pit of my stomach was nowhere to be found.

Traitorous fear. I nearly shook my fist in anger at it.

“That’s none of your business.”

I tried to focus my magic on pitching him through a window because I wanted Rufus as far away from me as I could get him.

But still nothing happened.

Rufus raised a finger and pressed it to my forehead. A zap of electricity wound over my crown and raced down my spine. My knees wobbled.

Every nerve ending in my body tingled. My fingers pulsed and my toes numbed.

“Since I can’t take you from here, and I certainly won’t kidnap and hide you because Magnolia Cove is a small town, I’ve done the next best thing.”

“What’s that?” I said. My tongue felt thick; my words were sluggish.

The shop door opened. Rufus glanced over his shoulder as a customer entered. He whirled back to me, flashing a smile so devilish that Satan himself would appreciate it. Then he snapped his fingers and vanished.

My knees shot to the floor as my aunts, Licky and Mint, entered. The cats immediately started meowing, the dogs barked and Hugo whimpered.

I raised a hand. My aunts flashed each other a look of fear and rushed to me.

“We just got back from a week away,” Licky said.

“We wanted to check on our favorite niece,” Mint added.

Licky pressed my hair from my face. “But what happened?”

Mint pulled me to standing. “You look like you’ve seen a ghost.”

“Worse,” I croaked. “Rufus was just here.” I pressed a hand to my forehead. “He did something to me. Something magical, but I don’t know what.”

My aunts exchanged another look. Licky’s mouth thinned to a line. “Then we’d better get you back to Mama’s.”

Mint thrust her shoulder under my arm. “Come on. Let’s take you home.” Her eyes darkened. “If Rufus is on the loose, there’s no telling what he did to you. Time is of the essence.”

Surely my day could only go up from here. 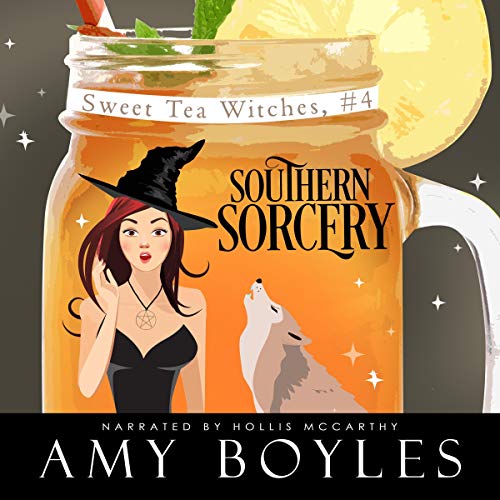 Listen to a sample below: