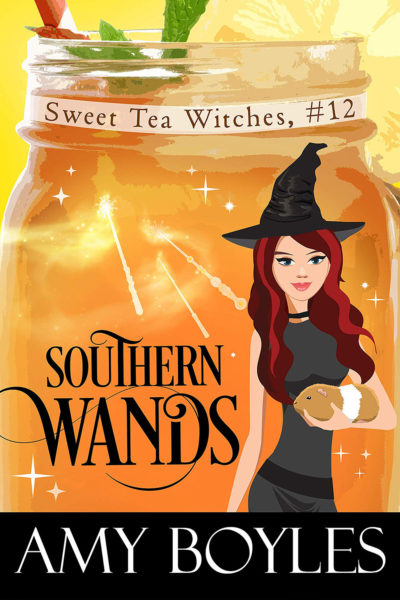 Life just won’t settle down for Pepper Dunn. The Head Witch Order has arrived with one mission—secure Pepper’s powers for themselves at any cost.

The entire Craple household is on deck to save Pepper. Grandma Betty has formed her own resistance, and even though they’re groaning about it, Amelia and Cordelia jump in to assist her.

In order for Pepper to fight the Order successfully, she must tap the very depths of her power. But Pepper also needs allies.

Pepper thinks she’s found one within the Order’s very ranks. But when her ally is murdered, Pepper herself looks guilty of the crime.

There’s no denying Pepper’s got a lot on her plate—learn her magic, prove she isn’t the killer and oh yes, finally give Axel an answer to his proposal.

The last should be the easiest one, but Rufus Mayes is in town to help and Pepper’s tangled feelings about Rufus often get in her way.

But there’s no time for confusion—if Pepper wants to be free of the Order, she must magically defeat the witch in charge.

Yet she must also uncover a killer. Can Pepper do it all? Face down the Order and solve a murder without getting herself killed in the process? Will she survive long enough to give Axel an answer? Can she finally put the lingering tension between her and Rufus to rest?

And most importantly, will Betty’s resistance cripple the Order’s ranks or cause more trouble for Pepper and the gang?

“Get in here. We’ve got some serious planning to do.”

Rufus Mayes, my one-time nemesis and sort-of friend, had just informed me that the Head Witch Order was on its way to Magnolia Cove, Alabama, with the sole purpose of seeking me out for my power. They wanted to use my power for themselves.

This meant we had to come up with a plan and fast.

Rufus crossed the threshold of Betty’s house, and I slammed the door, closing out the night.

He stood inside and pinned his gaze on me.

I hadn’t always trusted Rufus. In the past I would have preferred leading an alligator hunt in a swamp over believing a word he said.

But this time was different.

“What do we do? How can I stop them from doing anything to me?”

Rufus shook his head. “You’re asking me to teach you how to gain the skill level of an advanced witch in the span of one night. Because that’s what it will take to fight them off.”

I nodded hopefully. “So you don’t think it’ll be a problem.”

His expression twisted in frustration. “It’s a huge problem. Pepper, I can’t teach you years of magic that quickly.”

I cringed. “Are you sure? There must be a spell somewhere that will help me fake it. You know, fake it till you make it?”

“Aren’t you a warlock? Surely you know something.”

Footsteps hit the top of the stairs. “What’s all this racket?” My grandmother’s voice.

I debated hiding Rufus—shoving him in a closet and telling my grandmother a ridiculous lie that I was talking to myself. But what was the point? She’d know I was fibbing and would ferret Rufus out—probably by sniffing around the house.

“And Rufus,” I answered.

Betty paused. I could tell she was deciding if she was going to be hopping-mad Betty or gracious-hostess Betty.

I sighed and closed my eyes tight. “The Head Witch Order is on their way.”

Betty didn’t bother taking the stairs. She appeared right in front of me in her bathrobe and slippers.

My grandmother glared at Rufus. “Are you their messenger?”

Rufus shook his head of dark hair. “No. I found out and came to warn Pepper. They’re coming for her.”

“Because of the issues with the werewolves?” Betty said.

Apparently there had been a dispute between some witches and a pack of werewolves. The Head Witch Order was now getting involved.

Rufus nodded slightly. “What started as an argument quickly became a skirmish—at least from what I understand.”

Betty inspected Rufus from head to foot as if to make sure what he said was true.

I turned to Betty, hoping that maybe what Rufus predicted was wrong. “What will the Order do? And please don’t say take my powers.”

Betty pulled her glasses from her nose and cleaned them on her robe. “They’ll take your powers.”

“Crap.” I raked my fingers through my hair. “I was hoping that was only worst-case scenario.”

“That is if you don’t offer to help them.”

I shot Rufus a confused look. “You didn’t tell me I had a choice.”

He stared at the ceiling, silently asking God for patience, I was sure. “Ask Betty what they’ll want you to do, and then you decide.”

I glanced at Betty. “Well?”

She pulled her pipe from her robe. A flame flared on her fingertip, and Betty dipped it into the bowl, lighting the tobacco.

“They’ll want you to do things…bad things.” She slumped into her rocker and stared at the everlasting fire crackling in the hearth.

Her gaze slashed to me. “Hunt werewolves. They may want you to kill them.”

“They’ll definitely want her to do that,” Rufus said.

I winced. “I won’t kill anybody. Axel’s a werewolf. That would be like killing him.”

“Only some of them will be women,” Rufus said.

I shot him a dark look. “So you’re saying it won’t be like killing my boyfriend.”

“Unless he has breasts, I would say not.”

He shrugged. “I’m only telling you the truth. But talking about the nuances of biology doesn’t help. What do we do with you?” He turned to Betty. “I can’t teach her what she needs to know in one night.”

“Maybe you won’t have to,” Betty mused.

I shook my head. “I don’t understand why these witches think they can walk in and take whatever they want. Why are they so powerful? So feared?”

Rufus and Betty exchanged a look. “You can field this one,” she said.

Rufus crossed his arms and leaned against the wall. A slash of dark hair fell over his eye, covering one side of his face. He pushed it away with a finely sculpted hand. Rufus looked so natural in Betty’s home.

I wanted to hit myself over the head. There was definitely something wrong with me—like brain damage—if I thought Rufus Mayes looked perfect standing in my house.

“The Head Witch Order is an old sect of witches, dedicated to training only those with head witch powers, like yourself. They deem themselves as the elite. Only head witches are allowed membership, but the Order often finds itself tangled up in problems, like the werewolf issue.”

His dark gaze bored a hole straight through me. There were times when I felt that Rufus could look into my soul and see the string that connected a part of me to him.

I guess that was why I never wanted to give up on Rufus. I knew a good soul lived inside him. Sometimes it was buried, but it existed.

“The Order will see you as theirs. When they come, you have to do what they say. There are no arguments. They take what they want without question and without hesitation.”

I balked. “Because they can?”

“Yes,” he said quickly. His hand twitched. I felt he wanted to reach out to me, but we both stood unmoving. “They’ll want you to fight their war with your powers. You can either join their ranks or they’ll take what they want—no exceptions.”

Fear surged from my head to prick my toes. The hair on the back of my neck rose as a chill swept across my flesh. No wind rushed through the house. It could only be fear coursing through me.

“Betty, is there anything we can do?”

She tapped the stem of her pipe to her lips. Suddenly mischief flared in her eyes. “There is one thing.”

Hope buoyed in me. She had a plan, and when Betty had a plan, it was either brilliant or horrible.

Let’s hope this was on the side of brilliance. “What’s that?”

Betty dragged her gaze from Rufus to me. After a long moment she said, “We hide you.”