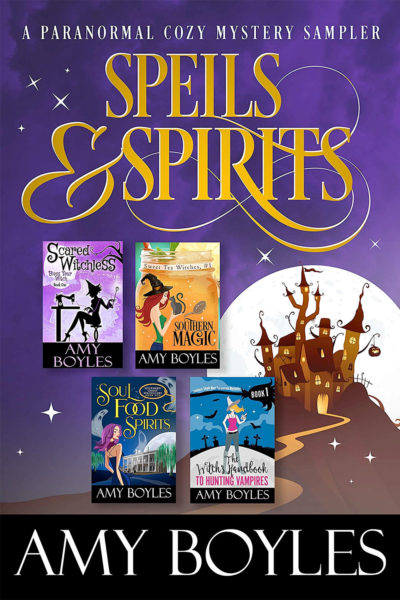 SCARED WITCHLESS – Dylan Apel is your average dressmaker living a simple life in Alabama. That is until she discovers she has magical powers. The whole witch deal seems really cool until someone murders Dylan’s best client with a poisoned gown meant for her.

Now everyone’s a suspect and Dylan is barely getting a handle on her new powers when she finds herself surrounded by witches bossing her this way and that, local police nosing about, and wary clients—death by clothing is not good for business. And the solstice is coming … a time when witch powers are at their peak. Can Dylan survive the chaos long enough to figure out her new life?

SOUTHERN MAGIC — In less than twenty-four hours Pepper Dunn loses her job, her boyfriend, and her home.

But when Pepper discovers she’s a witch and has inherited the most important store in the magical town of Magnolia Cove, Alabama, she’s as happy as a pig in mud.

Too bad the shop is a familiar pet store and Pepper doesn’t like animals—not even a teensy bit. Determined to sell the shop and get the heck out of town, Pepper’s plans go haywire when a local storeowner winds up dead and Pepper gets accused of murder.

Thrust into a magical mystery, Pepper teams up with a mysterious private detective and a cat so traumatized by the murder that she’s not talking—and that cat could hold the key to Pepper’s innocence.

Now Pepper must avoid trouble, solve the mystery, and placate her new grandmother, who keeps a strict ten p.m. curfew that’s enforced by the talking end of her shotgun.

Sounds like a simple day in the life—as if. Can Pepper solve the mystery or will she become the next victim of the Magnolia Cove murderer? And most importantly, will Pepper learn to love the animals she’s in charge of?

SOUL FOOD SPIRITS — Blissful Breneaux has spent her career catching troublesome ghosts for a covert government agency. But all that changes the day she is fired.

She has one shot to redeem herself— track down the biggest, baddest spirit the agency has ever known and haul him in.

Too bad that ghost resides in the one place Blissful despises—Haunted Hollow, Alabama. It’s the tourist attraction from hell. Blissful is knee deep in a foreign place—and it’s not just the deer head trophies and the giant pickup trucks that are throwing her for a loop.

When a local reveals he has information that could save her career, Blissful is all ears. But when he winds up murdered, Blissful becomes a suspect.

Thrust into a murder mystery, Blissful teams up with a pair of amateur ghost-hunting grannies who know more about town dynamics than hunting spirits. Then there’s the handsome bed and breakfast owner who’s keeping more secrets than he’s revealing. But Blissful is determined to discover what the murder victim knew. She’ll hunt for clues all over town. Will the hunt save her career or place her in the clutches of the Haunted Hollow murderer?

THE WITCH’S HANDBOOK — Andie Taylor is your average single mom. She’s got a beautiful toddler, a great job at the local preschool, a neurotic best friend and one huge secret—she used to hunt vampires. Now retired, Andie would much rather be wiping kid snot off her clothes than stalking the undead.