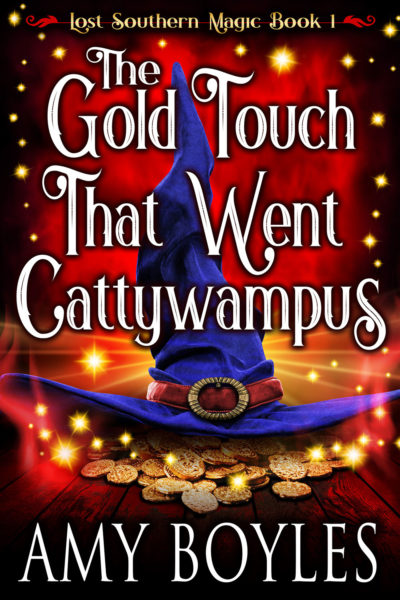 The Gold Touch That Went Cattywampus

When Blake Calhoun sets out to steal the heart fire, the object that makes the town of Magnolia Cove, Alabama, magical, his plan backfires. The heart isn’t stolen, instead it breaks into four pieces and scatters across the state. Now, newly married Pepper and Axel Reign must work to track down each piece. Lucky for them, when a person finds a piece, they are bestowed with strange abilities.

Pepper’s search will take her to Haunted Hollow, where she will reunite with Blissful Breneaux. But Blissful has her own problems. She’s trying to stop a demon from taking possession of folks in her small town. Meanwhile, a man has arrived, one who has an uncanny ability to turn objects into gold. Has he found a piece of the lost magic? If so, will Blissful and Pepper be able to claim it, or will Blake Calhoun beat them to it?

The series Lost Southern Magic is a four book, four series crossover. Over the span of these books, Pepper Reign with unite with ghosthunter Blissful Breneaux (of Southern Ghost Wranglers), witchy matchmaker Charming Calhoun (of Southern Belles and Spells Matchmakers) and Dylan Bane (of Bless Your Witch). These books will have witchy meet-ups and pit grandmother against grandmother. Each book will show Pepper’s perspective as well as surprise perspectives from Axel and even Betty.