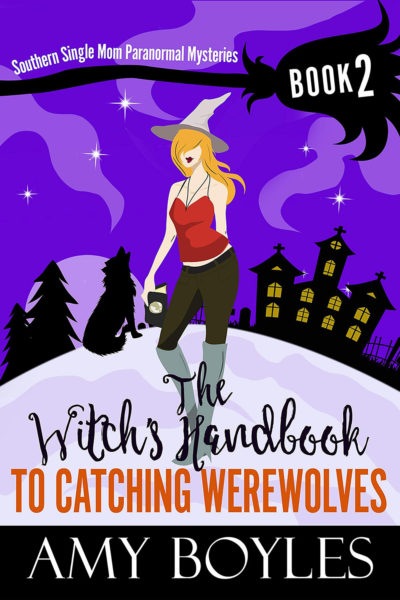 The Witch’s Handbook to Catching Werewolves

When a werewolf steals the annual Thanksgiving Parade turkey in broad daylight, Andie Taylor vows to lay down the law. Supernaturals have flooded into her quiet town of Normal, Alabama, and now they’re wreaking havoc.

But when the same werewolf winds up dead and Andie herself becomes a murder suspect, her world is flipped upside down.

Now it’s up to Andie to clear her name. To do that she must work with her estranged vampire husband, juggle a budding romance with an angel, and also raise her two-year-old daughter, who happens to be a powerful witch.

Can Andie solve the crime before she winds up in jail? Or will she be charged with a murder she didn’t commit?

“No, Mommy is not going to put the turkey on her head.”

I stood in the middle of downtown Normal, Alabama, with my two-year-old girl, Gabby.

Amber curls covered her little head. She glanced up at me with golden eyes and frowned. “Mommy not going to put the turkey on her head?”

Gabby narrowed her eyes and pointed into the street.

A newly waxed pickup truck rolled by. I stared at my reflection on the glossed-up door. Blonde hair in loose waves draped over my shoulders, and dark eyes peeked out from my fringed bangs. I pulled Gabby back as the truck’s load rumbled past—a decorative float.

All of town had shown up for the annual Thanksgiving parade. Main Street was filled with floats, classic cars, beauty queens, marching bands and cheerleaders. Two floats down, a local turkey farmer had created a masterpiece—papier-mâché pilgrims and Native Americans sat at a table eating their meal of thanks. Above them, an arch of fall-colored balloons in all shades of red and orange lashed one side of the float to the other, while a tame Thanksgiving turkey strutted back and forth, watching the spectators with small, blinking eyes.

“Mommy put turkey on her head.”

I ruffled Gabby’s curls. “No. Mommy’s not going to put the turkey on her head.”

“Well, why not, dear? It’s not as if the bird has to stay there for eternity.”

My great-aunt Dot was decked out in a golden sweater with turkey feathers sprouting from the shoulders, yellow sequined pants, and sunglasses that took up half of her head.

“Please don’t give her ideas,” I said. “I’m not doing anything with that turkey.”

“But you could, Andie,” came a voice from my open purse. Vordrid, a spirit inhabiting a Magic 8 Ball and my mentor. “You could manipulate it a little. Make your daughter laugh. Isn’t that what life’s all about?”

Okay, so in case you haven’t guessed, I’m a witch—oh, and a vampire hunter. I’d been in retirement from both up until a few weeks ago when a vampire decided to start feeding on my town. With the help of an angel—my daughter’s guardian—I’d been able to stop the bloodsuckers from delivering another angel to a pack of demons.

Yeah, I know. My life’s complicated.

That’s okay, I’ve got my shinola together.

A hand wrapped around my waist. “Did I ever tell you that you’re a great mom?”

I glanced over my shoulder. Well, speaking of angels, here was one now.

Stone brushed a lock of dark hair from his silver eyes. His shoulder-length locks made him look more rock star than angel. His seriously sculpted build didn’t hurt, either. I could definitely handle that.

“I’m not sure you’ve called me an awesome mother before, but I’ll take it if you do,” I said.

“I think it’s one of the things I like most about you.”

Before I could be blown over by that comment, he lowered his gaze. Long lashes brushed his high cheekbones. Stone handed me a paper cup with a protective sleeve. “Hot cider, at your service.”

“Oh, thank you.” I lowered my voice. “You angels are really something.”

Stone flashed me a crooked smile. “I try.”

I felt his warm hand on my back. An electrical pulse streaked down my spine. My bones jerked and popped. There was something about Stone that made my body split into a thousand pieces of delight. The connection between us was intoxicating it was so strong.

So incredibly strong that the outcome of our relationship, if we allowed it to progress too far, would make Stone mortal—meaning he would lose his place in heaven.

Yeah, some heavy stuff right there.

Except Stone needed to be an angel. His desire to help people outranked any yearning to be with me. That didn’t hurt my feelings too much. I mean, I do have an ego and all, but I try to ignore the fact that his presence rips my heart from my chest over and over. Most of the time I chew on my burning need for him and do my best to ignore it.

The turkey strutting on the float ruffled its feathers and plunged into the crowd, landing on a tall, lithe man who was all limbs. Without missing a beat, the man pulled the turkey from his head and tossed the fluttering bird back on the float. He gave a bashful smile and waved to the crowd.

“Well, Andie, at least someone put the turkey on their head,” Dot sniffed.

I ignored her. Why did elders always have to be right?

Stone leaned over. His mouth brushed my ear, sending a tingle zipping down my neck. “Lots of supernaturals turned up for the parade.”

My ears pricked at that. My gaze bobbed around the crowd, trying to figure out who was human and, well, who wasn’t.

A group of lithe, waiflike people stood in a group across the street. Fae, most likely, or even elves. Another group of burly men and women wearing dark denim and leather stood on the same side of the street as me, just farther down—werewolves or shape-shifters, probably.

My stomach clenched. I fisted my hands and instinctively started to pull energy from the air and yank it into my core. From there I could transfer it into magic.

Stone placed a hand on my shoulder. “They’re watching, same as us.”

“I mean,” he whispered, “they’re not doing anything to warrant you blowing them up with your magic.”

He was right. I released a shot of air, relaxed my hands and shook out my arms.

Stone squeezed me. “I know it’s hard to be around supers and not expect them to do something, but you’ve got to trust, Andie.”

So the whole supernatural-beings thing was new to Normal. Due to a magical situation, they’d arrived in droves a few weeks ago. Before then my town had been nearly void of magical beings.

My background as a hunter meant I had been taught to stalk vampires, though my instinct had filtered down to other supernaturals. So far, things had gone well with the newcomers. They’d opened up a few businesses but weren’t flaunting that they weren’t completely human, which was great.

Because they’d have me to deal with if they did.

But still, I’d moved to Normal to have a quiet life where no one knew about my powers. I wanted to keep things that way. With all the new folks coming in, I felt a countdown clock ticking in my gut. I had a bad feeling that my family would be exposed. This was small town, Alabama, y’all. I didn’t need anyone to know I was a witch and burn me at the stake.

Just kidding. I don’t think folks burn others at the stake anymore.

Anyway, it was a tenuous relationship—at least on my side. Not that the other supernaturals knew I felt that way. I’d kept it to myself, and Stone, of course.

“As long as they don’t do anything stupid,” I said to him. “We should all be fine.”

The turkey float rumbled up to us. The gobbler on top strutted back and forth, displaying his wide fan of tail feathers.

Dot nudged my elbow. “Go on and take one of those feathers for her.” She winked at me.

My jaw dropped. “I will not. Dot, the word is incognito—incognito. That’s what we need to be.”

“Oh, I thought you were going to say apocalypse,” Dot said.

I shook my head. “Why would I say that?”

I gritted my teeth, working my patience back down to my gut. “I don’t know what to do with you sometimes.”

The turkey continued to strut as the float rolled past. It was all cool-as-a-cucumber and enjoying the ride when a dark figure shot onto the float. The platform dipped away from us. For a brief second I couldn’t see. When it righted itself, I saw exactly what was going on.

A creature covered with thick black fur from head to foot stood on the platform. His legs were spread wide, and devilish yellow eyes flashed over the crowd. The werewolf (’cause that’s what it was) stretched over six feet as it balanced on hind legs.

Gasps of shock and awe filled the crowd.

The animal dropped onto all fours and snapped its jaws around the turkey’s neck. The gobbler squawked as the wolf jumped from the float and raced into the crowd. Children screamed. Mothers shielded their young ones’ eyes while the rest of the mass just stood with mouths gaping—including myself.

Gabby tugged on my leg. “Mommy, what happened?”

I downed the last of my cider and crunched the cup in my fist. Anger curled in veins. “A werewolf just stole the Thanksgiving turkey,” I whispered hoarsely.

“Oh, I’m very serious. And now that creature is going to have to deal with me.”

Stone placed a hand on my shoulder.

I glared at him. “No one comes into my town, screws with my normal life and gets away with it. Let’s hunt him down.”