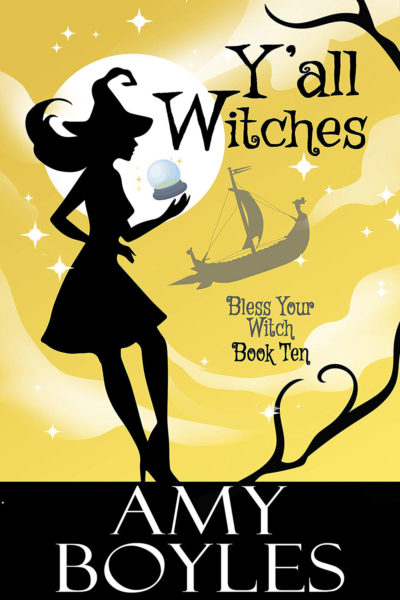 Who knew honeymoons could be deadly?

When Dylan and Roman set sail for their honeymoon they expect couples massages and candlelit dinners. But that dream is shattered when Grandma Hazel stows away on their cruise. It seems trouble follows Grandma wherever she goes. This trip is no different, for the ship’s stowaway catcher is hot on her trail, and he’s intent on finding the stowaway and making her walk the plank.

Not only that, but when a socialite is murdered, Dylan finds herself in the middle of the mystery. But wait. She’s promised Roman she’s staying out of trouble while on their honeymoon.

Now, can Dylan keep her grandmother safe, help catch a murderer, and experience a once-in-a-lifetime trip?

Or will she wind up another victim of the cruise ship murderer?

The airship rocked to the right. I clutched the bolted-down desk, my gut twisting. I swiped a strand of dark hair from my eyes. “Ugh. When is this storm going to be over?”

Roman rubbed my back. “We should be through it soon. Can you hold on?”

Nausea racked my stomach. I bit back the urge to heave. “I don’t know.”

He raked his fingers up the back of his hair. His short hair that he’d chopped a few days ago, right before our wedding.

Yes, Roman and I had finally gotten married. After he’d been accused of murder and absolved of the crime, we got hitched before all our family and our magical friends at Castle Witch.

We were on day one of our honeymoon, riding a magical airship to a destination called Celestial Island.

And I was seasick—or airsick, I guess I could say.

“I’ll run down and get you some crackers and Sprite,” Roman said.

“I don’t know. Do you think that’ll work? My grandmother always gave me some sort of fizzy tablets.”

Roman frowned briefly and then smiled. “I’ll see what I can stir up.”

I had a feeling that me questioning his expertise had caused a little ping of annoyance in him. “Whatever you think,” I said quickly. “If you think Sprite and crackers will do the trick, I’m sure that’ll be just fine.”

He kissed me quickly on the forehead. “I’ll be right back. I’ll put the trash can beside you in case you need it.”

I moaned as another wave of nausea hit. “Thanks,” I croaked.

I sank onto the bed and closed my eyes, praying to all that was good in the world that the sickness would pass quickly.

I placed a hand over my eyes and breathed in and out, in and out. I could probably cure myself by magical means, but I’d never done that and wasn’t sure if it would work.

By now you’ve figured out that I’m a witch. In fact, my whole family is—two grandmothers and two sisters.

Of course, they weren’t here with me on my honeymoon.

If truth be told, I needed a break from them, a big wide break.

I curled into a ball, lying as still as possible. The sickness was subsiding, and before another wave hit me, a rap came from the door.

I pushed myself up slowly and staggered over, my stomach practically in my mouth as I opened the door.

A man with straggly black hair, a long nose and a wide net stood in the doorway. His beady eyes shifted from side to side.

His appearance speared me in place. There was something about the nose, the dancing eyes that sent a cold shiver thrumming in my heart.

His voice lilted. The words rolled off his tongue as he half sung them. “Looking for stowaways. Do you have any stowaways in here?”

The man poked his nose through the door and inhaled deeply. “I’m Simon Sniff. Official stowaway finder. I caught a whiff of one earlier, followed it to this deck.”

I frowned. “Really? There aren’t any stowaways here.”

The airship lurched. I grabbed my stomach as a surge of sickness washed over me. “Excuse me.” I ran to the wastebasket, readying myself to be sick, but nothing happened.

Sniff tapped his nose. “Keep your eyes peeled for a stowaway. There’s one here. Somewhere. I can smell it.”

He closed the door behind him, and I heard Sniff whistle as he moved on to the next cabin.

“Whew,” came a voice from the corner. “I never thought he’d leave.”

I froze. That voice. I knew that voice. Knew it in my sleep, my waking hours, even in the darkest and lightest of my dreams.

And I didn’t need to be hearing it on my honeymoon.

I glanced behind me. Standing in my cabin, nautical glasses over her eyes, a leather cap on her head and wearing a long leather duster and a scarf around her neck, stood my Grandma Hazel.

The words ground out slowly. “What. Are. You. Doing. Here.”

Grandma plucked the glasses to the top of her head. “I’m here to protect you, Dylan. Make sure everything goes well with your honeymoon. If you need a shoulder to cry on, I’ll be here. If you have any questions about what happens on your wedding night, I’m also here. I’m all around here to help in any way that I can.”

She clasped her hands together. “Besides, I’ve never been to Celestial Island. Always wanted to go. And now I have my chance.” She clapped my shoulder. “We’ll have such a wonderful time together.”

I shook my head. “No, we won’t. You need to go. Now. You’re the stupid stowaway that Sniff guy was talking about.” I threw up my hands. “Why can’t I for just five minutes get a break? Seriously. Why can’t I?”

The airship lurched, and I held my stomach, groaning.

“Oh, I see you’ve got a case of seasickness. Did you bring any fizzy tablets?”

She rubbed her liver-spotted hands together. They glowed with magic. Grandma placed one on my stomach and one on my head. The warm tingle of her power flowed through me. A moment later my nausea had vanished.

“Now, Dylan, I won’t get in the way. Don’t worry. I’m only here if you need me. I can create a top bunk on your bed and sleep there.”

I flared my arms. “No way. You’re not staying here. Roman might be amazing and patient, but that limit will be reached if he finds you here.”

The door opened, and Roman stepped inside. “I found fizzy tablets, crackers and Sprite.” He froze when he saw Grandma. “And I see you found something else.”

Grandma strode forward. “Don’t worry; I’m not here to ruin your honeymoon. I’ve only come if you have questions, need encouragement or seek advice. I’ve got my own room I’ll be staying in. It’s not far from here, just down the hall.”

Grandma wiggled her fingers, and her outfit changed from Amelia Earhart to something more normal. “Now, I’ll just be going and finding my cabin. I’ll be around if you need me.”

She flitted from the room before I could say anything else.

I smacked a palm to my forehead. “She showed up right after you left.”

He frowned. “What’s she doing here?”

“Says she wants to see Celestial Island. Grandma appeared right after the stowaway hunter showed up at the door, sniffing them out.”

Roman raked his fingers through his sun-bleached blond hair. His green eyes darkened, became turbulent. “If that guy’s about, you better bring her back in here.”

I stamped my foot. “But it’s our honeymoon. She knows that. She just has to create mischief everywhere she goes.”

Roman shook his head. “Doesn’t matter,” he said, his voice deepening. “If that guy gets ahold of her, he’ll dish out the maximum punishment for stowaways.”

Roman’s jaw clenched when he said, “He’ll force her to walk the plank.”