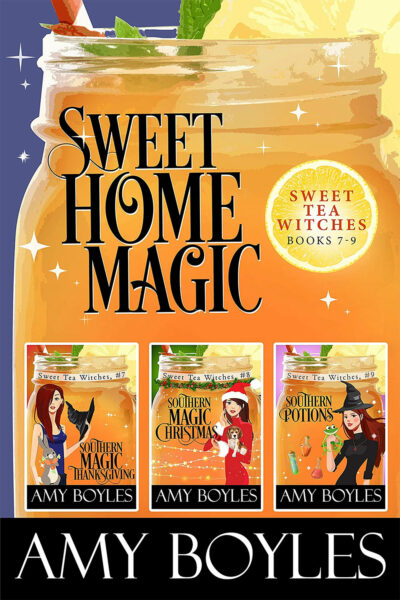 But she has little time to mourn. When a new baker sets up shop across the street from Pepper’s cousin and starts stealing customers, it’s all out war. But when the storeowner ends up murdered and Pepper’s cousin becomes suspect number one, it’s up to Pepper to help.

Thrust into a mystery, she teams up with a talking rabbit that’s keeping more information than he’s revealing and an old foe turned friend. More secrets than Pepper bargained for unravel in front of her, but the main one—who killed the baker, is anyone’s guess.

Will Pepper solve the murder or will she become the next victim?

It’s Christmas in Magnolia Cove and Pepper Dunn is ready. She’s making her list and checking it twice.

Axel’s parents are visiting for the holiday and Pepper wants things to go smoothly. But when his mom insults the town Scrooge things turn rocky fast.

Worse, when the town Scrooge is murdered, fingers quickly point to Axel’s mom.
Now it’s up to Axel and Pepper to find the real murderer before his mom winds up paying the price for a crime she didn’t commit.

Can Pepper and Axel save the day or will the magical season of Christmas turn into the deadliest ever known to Magnolia Cove?

One member of Pepper’s family has been turned into a toad. Can she save them?

It’s New Year’s and Pepper Dunn is ready to celebrate. She’s been hard at work creating a potion for the annual Potion-Making Contest. All she must do is present her creation.

Pepper’s plans go awry when a sorceress claims she can turn a witch into a toad—all she needs is a volunteer.

But when the sorceress is murdered and the potion stolen, all Pepper wants is to stay out of it. She’s had enough of murders.

Problem is, one of her relatives was transformed into a toad. With the potion missing, Pepper must act fast to find it before her family member is stuck living as a toad—forever.

Can Pepper solve the mystery? Grab your copy to find out!